Winter is coming… and it has arrived on HBO with a thunderous bang, marrying the grand ambitions of the novel to the visceral promise of television. The first episode of the new HBO series, Game of Thrones, dispelled a lot of my ambivalent feelings about having my all-time favorite series from the fantasy genre being adapted into television format. It didn’t matter one whit that HBO had been home to some of the most brilliant television programming of the past 20 years in The Sopranos and The Wire, because adapting a book for television requires sacrifices. But I’m glad to announce that, despite the limitations of television, or perhaps because of them, the opener pulled it off. 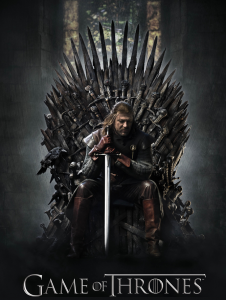 Uneasy lies the butt on the throne

Full disclosure: i’m not a fantasy buff. In fact, I’ve never enjoyed reading fantasy – I find science fiction infinitely more interesting – until Paul Newall recommended The Song of Ice and Fire series. Naturally I was skeptical so I read the first volume at the bookstore. And That. Was. All. She. Wrote.  Political intrigue, great characterization, realism with a dash of magic, and unpredictable plot lines.

Being stoked by the pre-show hype for the past two weeks, I convinced a friend familiar with neither the genre nor the series to record the early HBO show so we could watch it together. A few pauses and some brief exposition was required to help him keep up with the two dozens of characters, so I realize that the show may be too taxing for the newcomer, but this should be less of a problem as the season rolls on and each character gets more facetime to themselves.

Within the first 10 minutes there are two beheadings, and throughout the show there’s plenty of nudity and screwing. Zod bless HBO, and bless George Martin for grounding his fantasy world with realism in a medieval era. The episode is basically expository, where two houses meet together in one giant feast and the King of the 7 kingdoms Baratheon offers Lord Stark the role of the Hand of the King, and on another continent, across the Narrow Seas, the deposed royal family Targaryens scheme to retake the throne by having the sister Daenerys married off to a warlord.

Sean Bean successfully plays against type as the noble Lord Stark. But Peter Dinkleage has the juiciest role as Tyrion Lannister, thanks to some of the sauciest lines this side of Lord Henry. I was also struck by Emilia Clarke’s performance as the terrified bride Daenerys, and I hope she has the required inner strength the role will require. Martin has the advantage of writing her inner monologue, so the show will have to be inventive in the upcoming episodes.

The story doesn’t really pick up until the last ten minutes, so it might not have been enough to recruit new viewers, weaned on far less challenging fare like Spartacus: Blood in the Sand, or Tudors, where they could afford to miss a few lines here and there. Game of Thrones will punish you for missing anything because every line and scene is full of allusion and foreshadowing.

There are things, indeed, you do for love.

I’ve finally found a new TV show to follow, and now 2011 won’t be a total loss without Mad Men.