This exceedingly liberal idea that everyone is an artist –irrespective of the fact whether they’ve produced any artwork – has never sat well with me, personally. If art is the process of arresting creativity with production that is shared with others, then only a select few qualify as artists. In other words: only the actual is genuine, not the potential.

The idea that we are all artists relies on the idea that art must be intrinsic. However, this ignores the fact that art is a 4000 year old conversation that includes the extrinsic. The intrinsic is subjectivity – i.e., creativity and originality, whereas the extrinsic is influence and dialogue. Without the extrinsic aspect, art devolves into self-indulgence that relates to nobody, a private language utterly incomprehensible to everyone, including the creator herself. It is up to the creator to decide who her influences are and how to communicate to people and establish a dialogue with other artists through her artwork.

The idea that we should be more inclusive of others as artists is that too many people underestimate or deny or fail to explore their drives. However artists aren’t immune to this – that is a human condition nobody can escape. The moment we figure art as a social class thing is the moment we leave aesthetics to the clammy hands of sociologists and ideologues. Art becomes a toy for social theorists to kick around, just another tool for propagandists to install culture programming writ large. However, creativity far exceeds the tiny boxes of class critique, and goes beyond the limited imagination of the ideologue.

Art is up to the artist to create. It is up to the rest of us to judge it – praise it, ignore it, or condemn it. But the minute we take art away from the artists is the minute we contort art to foreign purposes and subvert it to propaganda. The muse is far more capricious than the whims of a social planner could ever imagine.

After all, you aren’t an artist unless a muse – be it an inconstant lover or a cruel demoness – visits you. 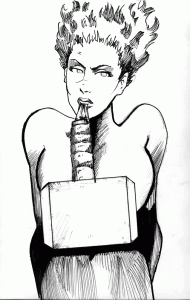