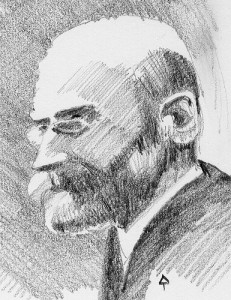 In a previous blog All Roads Lead to Ferdinand, I discussed Saussure as an opening of a new paradigm in the human sciences. Today, up at bat is Emile Durkheim, one of the founding fathers of the French social anthropology, who had a revolutionary insight that complements Saussure’s in linguistics.

He argued that the individual self was more a product of “common life,” than its determinant (Division of Labor p. 338-339) and that it was a relatively recent and relatively superficial arrival in human history.

Durkheim based his explanation on the “common life” in which society consisted of much more than just the collection of its individuals. He pointed at “collective representations” as something generated by people in association and different from individual representations generated by individuals: “Collective representations are exterior to individual minds ….they do not derive from them as such but from the association of minds, which is a very different thing… private sentiments do not become social except by combination under the action of the sui generis forces developed in association… they become something else…” (Sociology & Philosophy p.25)

At first this seems to fly in the face of common sense – how can mental representations exist outside of individual minds? What medium can ideas or beliefs or feelings reside if not in individual brains? But common sense is limited, and its limits become all too obvious once social phenomena is traced back to individual origins. These attempts turn out to be failures.

Lets take a teenage group, say mine during high school in the nineties. Exactly what happens when a certain arcade becomes the “cool” place for us to hang out? Is the phenomenon of this “coolness” reducible to the random collection of individual preferences and judgment? It’s more likely that the members of my crew liked the arcade because it is “cool,” not vice versa. Its not the case that at least one member must have liked the arcade purely on his or her behalf. We all caught the feeling of preferring the arcade from each other, before we arrived at the individual judgment on the subject at all. This preference may ultimately reside in our individual brains, but it is not individually generated the way common sense dictates. The arcade wasn’t cool because we all liked it – it’s cool because everyone else liked it.

Durkheim used his concept collective representation to explain the phenomenon of religious belief. Most anthropologists, Anglo-American ones, tried tracing religious belief back to individual origins, back to pre-scientific misinterpretations of experience an individual may stumble on by his/her lonesome.

Tylor and Spencer claimed that the primitive, referring to his own dreams where he and his buddies went about their lives independent of their waking bodies, naturally arrived at the belief of independent spirits. Muller and Jevons suggested the primitive, bedazzled by the awesome forces of the storm or fire, and predisposed to explain these forces in human terms, began to attribute godlike powers to nature. Frazer and Boas claimed the primitive, incapable of distinguishing between relations of similarity and contiguity from relations of actual causation, created a system of superstitious beliefs in ritual magic to protect themselves from a dangerous world.

Durkheim in opposition claimed the primitive thought more in the terms of impersonal forces rather than personal spirits, and they resided in grass and hair as much as grand romantic instances of storm or fires, and such self-serving magic for individual were mere offshoots of social religion, not their causes. The general form of religious beliefs the Anglo-American anthropologists took as basic were later and sophisticated derivations.

Durkheim defined elementary religious belief as the division of the sacred and profane. This is the fundamental of his entire argument and for structuralist anthropology as well. Whether the sacred is thought of as supernatural in modern terms or as higher or transcendental is irrelevant. The sacred itself is less important than the division which differentiate it from the profane.

“The real characteristic of religious phenomena is that they always suppose a bipartite division of the whole universe, known & knowable, into two classes which embrace all that exists but radically exclude one another.” (Elementary Forms of Religious Life, p. 20) in other words, the sacred is considered as a world apart.

Totemism logically follows from this definition as the fundamental form of religious belief. Durkheim took totemism as common for all primitive societies, in which each clan within the tribes held certain things sacred and maintains with these things certain special, unnatural relations. Members of an Ostrich clan, for example, may be forbidden from eating the flesh of ostriches. Yet at the same time, they are the only clan permitted to hunt and kill ostriches. Durkheim explains the system of taboos and interdiction in primitive society: they maintain the difference of the sacred and kept it apart from the profane.

The observing and maintaining the special division between the sacred and profane, the clan draws together and distinguishes itself from the rest of the tribe. The clan is the unity of all who experiences the world the same manner. Durkheim revolutionized the order of things with the claim that the division between the sacred and profane existed for the sake of the unity of the clan. Social bonding is the motive behind the entire totemic system. Therefore, totemism is not about man’s relation to the natural world at all – even though religious feelings are directed towards plants & animals. Totemism is about man’s relation to man. Once members of the clan worship the clan’s certain totem-animal they are submitting to the social principle by which they as individuals are bonded. The totem is the clan’s own sign of itself.

“The god of the clan, the totemic principle can… be nothing else than the clan itself, personified and represented to the imagination under the visible form of the animal or vegetable which serves as totem.” (Religious Life, 206)

They did not know that the totem is their own sign of themselves. The sacredness of the ostrich is experienced as a property of the physical world, much like its speed or eating habits. This is the paradox – a totemic system is created by man and for man – yet it escapes the consciousness and control of any individual. It belongs to man in association, and individuals are constrained by it as much they are constrained by the properties of the physical world.

In the next blog, I will discuss how Levi-Strauss’ structural anthropology builds from Durkheim to a philosophy of the social a priori.

2 thoughts on “Next stop: Durkheim & anthropology”