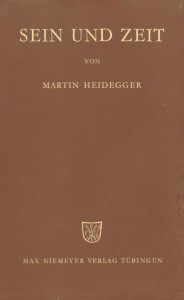 No self-respecting student of Continental philosophy can speak with any credibility unless they’ve studied the juggernaut of the 20th century Being & Time! I am about to set out on a journey but I may not return the same, if at all.

I’ve already read bits as a lowly undergrad. And those bits proved that I was more than just wet behind the ears. This time… I’ve taken an alias to cover my true origins as a Nietzschean ironist. So I’ll enter the world of Being & Time unnoticed in this alter ego.

I shall no longer be known as the Nietzschean Heretic but as Dasein Heretic. I’ll leave behind Nietzsche in appearance but I shall hold on to the light of Götzendämmerung when the labyrinth gets too twisted.

Either I’ll end up just another notch on the bedpost of Being & Time or I’ll conquer the juggernaut of philosophy. Either my Nietzsche will persist through the endless, suffocating labyrinth that is Being & Time, or Dasein will gobble up Götzendämmerung like many other philosophies!

Note. I’ve chosen the Stambaugh translation because it’s 30 years more recent than the original Macquarie & Robinson translation, plus with 30 years of additional translations of Heidegger’s other works that inform the translation. 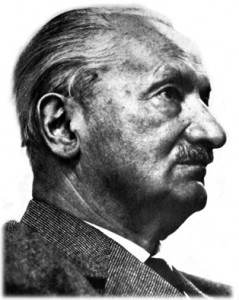 The problem with reading difficult thinkers like Heidegger is that even if you do agree you probably don’t understand at least on your first reading. What sounds good isn’t necessarily always good and if you don’t grasp the ideas properly, there’s no way to assess their validity. Your entire brainpower is spent on trying to understand what he says & you have nothing left over for assessment. Worse yet, you may also be reading too much into Heidegger, bringing extra condiments to the table. Even if you assume he makes sense and you do not understand, as you try to find ways to explain his ideas you end up inserting ideas that aren’t there.

On one hand, since Heidegger formulates philosophy in unfamiliar terms, he is not spelling out any dependence on the philosophical tradition and that leaves us without any guidance to its true meaning. Hence, my familiarity with traditional philosophy and the novice’s lack of familiarity are both barriers to true understanding.

Moreover the novice is more a sympathetic reader because the book is about something of interest to everyone: death, conscience, guilt, and authentic existence. The novice reader won’t be as objectionable to the book as the professional thinker because he isn’t as prejudiced by the tradition. Yet a thorough understanding of the tradition preceding Heidegger is necessary to understand him.

According to Heidegger, the meaning of Being has been neglected in philosophy. After proving that looking for its meaning does not include circular reasoning, he shows us that it must have a different kind of meaning than other concepts. That meaning cannot be a theoretical one, because that would always require premises, and that mean reducing Being to something other that is, but there is no way that these other beings could exhaust the meaning of the Being they take part in.

Why should we bother about the question of Being?

Go back to Aristotle & Plato. Their philosophies have been trivialized, vulgarized regarding Being in 3 ways:

Bottom line: Being is obscure, remains indefinable, and not explicitly self-evident. Not only is there no answer to the question of being, even the question itself is obscure.

The meaning of Being is in the way it manifests itself; therefore, the method of phenomenology is used to unhide it. Moreover, the being that is able to ask questions, Dasein (there-being), is privileged in this book. Because only Dasein can question its own being & thus understand it, the study must be based on analyzing how Dasein purports to understand itself.

When a circle is not a circle

The gist of the claim: There’s no circular reasoning in asking the meaning of Being because meaning is NOT derived from premises through logic, which is a necessary condition for something to even be a possible species of circular reasoning. But the question purports to show the foundation or unhide it. Important: for Heidegger, truth is unhiddenness. The meaning of Being cannot be deduced. Only shown.

All ontology is circular. Heidegger’s approach has to be non-deductive because there’s NO prior validation of the inferential rules for producing conclusions – other than assuming the conclusions to be true or some true & others inferred from them.

Reading Heidegger has led me to the speculation that his use of the word Being has a lot in common with Oroboros. The Oroboros is not just a serpent or a circle but a symbol of a meaning that turns back on itself.

Next: I will go in-depth more about Dasein, and talk about what is easily my favorite, the most obviously Nietzschean part – the Destruction.  (ETA: here’s the link)