Admittedly, this was a tough year, since there weren’t as many quality shows as there were in the last two years. It probably did not help matters that the best two shows actually began during the 2012 fall season. Last year, I tried to pick the best two series of each season, but that won’t work this year, because there aren’t enough to qualify.

If early David Lynch tried to adapt Welcome to the Dollhouse, you’d get Aku no Hana. What forced most audiences into the Uncanny Valley resulted in the most genuinely disturbing and difficult to watch anime in years, if not decades. The exaggerated minimalist style and rotoscoping technique forced us out of our comfort zone, and that brought home an unnerving effect: a boring and empty town populated with boring and empty people — with the exception of Nakamura.

Easily belongs on the list of the best of the 2010’s. Has it all – direction, near perfect pacing, consistent animated style, and most important of all: a fully fleshed out post-apocalyptic world. A solid cast rounded by a great villain in Yakomaru makes this apocalyptic horror just right. 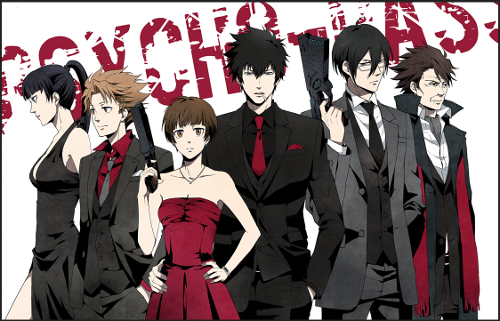 This spiritual descendant of Ghost in the Shell proved that Gen Urobuchi could do nihilism in scifi as well as he did in fantasy (Fate/Zero). Cyberpunk works best when it focuses on how technology impacts society in an intelligent and profound way, while maintaining narrative flow that is spearheaded with great characters.

Watamote is far the funniest show of the year. Its black humor pulls no punches with a horribly insecure, paranoid, and self-sabotaging character. The humanist side of the show comes out in the kindness and patience of all the others, despite Tomoko’s worst efforts. Is it any surprise that a literate and trenchant show about otaku and fujoshi has not succeeded commercially in Japan?

A solid follow-up to a brilliant opening season, Chihayafuru S2 slowed down somewhat in its season-long focus on the second high school tournament over its characters, but I had no complaints.

Shaft and NisiOisin continue their marriage made in anime heaven as this season pushed the envelope on our favorite characters by having different ones narrate different arcs. This resulted in a richer universe of pretentious dialogue by wonderfully narcissistic people.

Everything that Kill la Kill should have been. Ambitious, Original, Confident, Memorable – all without exploitation masquerading as manufactured controversy.

Somewhat underrated, but typical of Bones, it reaches its heights in spots – and most certainly with that mind-twisting middle third arc. You can’t go wrong with references to Shakespeare and BONES studio’s brand of spectacle with this thrilling mystery that blends fantasy with literature.

What began with aplomb as a promising scifi series ended in a commercially fueled pandering thud.

A thrilling series that could have been greater had it tightened up the pacing and moved the thin characterization beyond its shounen trappings. Its dramatic improvement over the craptacularly rendered manga deserves a honorable mention.