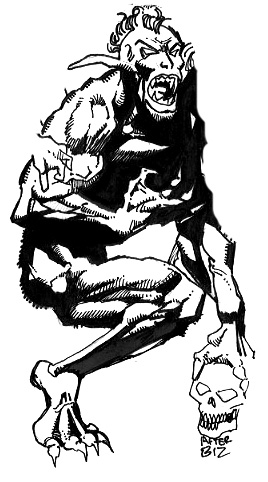 Clearly dishonest, disloyal, lacking interest in relationships, but in spite of these vices, Orcus represents a sort of exciting danger, particularly for women and goddesses. Orcus has an extreme personality that is rude, acerbic and bitingly jocular. He does not truly care about what others think, and paradoxically, this only makes him even more charismatic. He is effective in a conservative society for that enhances his dark popularity that brings a fresh air to the staid circles. Orcus does not fret about going too far, for his modus operandi is to go further than anyone else. Besides this extremism, Orcus is also cruel. His greatest asset is his reputation. He does not ever downplay it or even apologize for it. Instead, he embraces it and enhances it, making him fascinating. However, he is the ultimate apostate, totally unfaithful by nature, and whosoever gets involved with him ends up paying for his feckless ways.

Generally, the gods are often distracted, too self-absorbed, and even unresponsive, which means they cannot give the sort of attention many goddesses desire. They remain dissatisfied at not being desired or appreciated enough. Orcus, however, unlike the majority of the calculating gods, is delightfully unrestrained by conscience, a slave of his passions. Moreover, given his mastery of bewitching language, the goddesses give in to him easily. Outwardly, the goddesses are ambivalent about his reputation, but under this mask of ambivalence, they all share the same secret interest.

Orcus’ greatest enemies are the male gods who are far less indulgent than the goddesses, and the most dangerous ones are not the violent gods, but the insecure ones. They feel threatened by his notoriety, and being envious of his lifestyle, they attack in hidden ways, sometimes by masking their persecutions with morality.

The mistakes he commits with impunity are easily rectified with even more audacious actions. Only the bold are admired, while the hesitant struggle with self-imposed obstacles. Orcus lies boldly, for he understands that the bolder it is, the more convincing it becomes. The bolder his moves, the larger he appears, becoming more powerful than he is.

One thought on “Orcus”