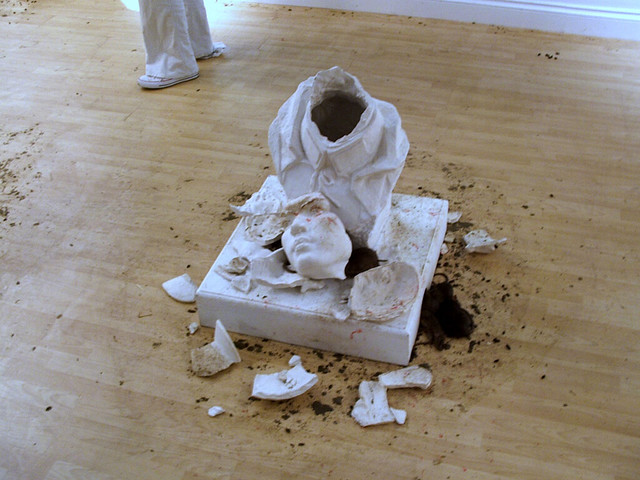 I have compiled a brief essay on linguistic analysis and its trivialization of philosophy. The first part will look at the historical precedent of linguistic analysis and the methodology of the program, and its limitations. In the next part I will focus on Wittgenstein, on whether the structure of the world is necessarily the structure of our language, and other related aspects.

Linguistic analysis replaced positivism, once the logical positivists (LPs) surrendered to its internal contradictions. Thinkers who were originally LPs, became disenchanted with the paradigm and moved on to analysis. Lets look at the similarities:

1. Both LP and analysis gave up the original purpose of philosophy, the understanding of the world. Both assumed that philosophy should analyze verbalized concepts and other linguistic formulations. Yet it should be obvious that LP had a rationale for this conception of philosophy while analysis didn’t. LPs say philosophy does not contribute to the understanding of the world (no first order philosophy) because that was now the jurisprudence of the sciences. Therefore there is nothing left for philosophy to contribute. Although the analysts stopped deluding themselves that the only meaningful knowledge was science, they inherited the LPs’ conception of philosophy. As you can see, after giving up the justification the analysts no longer have grounds for this conception. Of course, in the place of the sciences the analysts fell back on common sense and its consequent use of language.

Now, P. F. Strawson said that generally people who use everyday language are not using a crude instrument, but a very complicated one, and the job of tracing the many connections between those concepts is very rich and rewarding. Although he admits that the structure of this conceptual scheme of ordinary language contains many problems, the description of the structure is very difficult, yet entirely appropriate as the sole function of philosophy.

For one, Strawson seems to assume that the concepts in the ordinary use of language require the existence of a theory. If this was true, then it is also true that if playing basketball is such a profound experience, then we must acquire a theoretical perspective of the game. This is of course, false, because playing basketball cannot be the instantiation of a theory, and neither would playing require a theory. The theory wouldn’t improve the fans’ love for the game, nor would it be any assistance to the players. The same reason exist for why there is no requirement to possess a fully fleshed out systematic theory of marriage, of love, of eating, or of fucking. Therefore, even though an activity is important, there is no need to have a theoretical view of it. Life lived for the sake of correspondence with theories is inauthentic and truly tragic….

Moreover, there is no justification for the requirement that analysis should not produce first order knowledge at all. Ordinary common sense is taken for granted, and the sole purpose of philosophy is to inspect the inherent structure. Therein the problem lies: common sense is utterly limited as a tool for the understanding of the world. For the majority of basic questions about experience, common sense has no answer. Of course, Strawson would insist that since we cannot answer them, they shouldn’t be asked in the first place. We’re better off with much easier questions.

In other words, we should stick with what we know, stay home, and do little house-cleaning from time to time. Well, since our common sense is culture dependent, that the idea of perception, identity, ethics are not uniform across history and cultures, then it follows that the structure of common sense is not universal, nor is it entirely determined by biology.

2. Another of the fundamental beliefs of linguistic analysts is that there cannot be a philosophical system. This is another leftover from the legacy of LP. All philosophical enterprises must start from the real world, what actually takes place, where people do say things, rather than from theoretical efforts. Since analysts took for granted that we think in words, and that the best way to address a philosophical problem was to formulate it in clear language and analyze the formulation, this instituted a central concern with language. Therefore, philosophy is about language, or specifically, the clarification of concepts with words. All problems of philosophy are actually problems of language, how it is used or misused, and the problems were to be solved by linguistic analysis.

This attitude betrays a lack of understanding of the true nature of philosophical problems. If a person does not have philosophical problems, or has any idea what it was like to have them, they will invariably develop an arrogant and myopic attitude towards philosophy, particularly the problems of the past two thousand years. No matter the analytic ability or dialectical skill of the esteemed analyst, this self-delusion in turn left behind a legacy of irrelevant and superficial body of work, a testament of how intellectuals can mistake an unimportant activity (using dialectical skills to carve up arguments) for the actual one.

The chief difference between the linguistic analysts and the great philosophers lie in how the analysts interpreted the thinkers and what the dead philosophers actually wrote, and the difference is disturbing:

For instance, the former claimed George Berkeley was analyzing some propositions in a certain light, in opposition to John Locke, who had analyzed the same propositions in a different light, and the differences between those analyses would themselves be analyzed. However, if you open Locke and Berkeley’s books, you won’t find such linguistic gymnastics, but a prodigious effort to understand the nature of reality, and the manner human beings gain that understanding, and the nature and limits of that understanding. Where the latter concerned themselves in important efforts such as the fundamental questions of existence, the former were merely engaging in crossword puzzles.

Whereas the philosophers had always been trying to understand the world, those analysts had stopped doing philosophy. Philosophy had been engaged in the business of many different disciplines: besides epistemology, science, morals, politics, religion, history, sociology, law, education, mathematics, logic, aesthetics. Consequently the reduction of all the problems of those disciplines to matters of language is terribly simplistic, and implausibly naive, if not ridiculous.

The upside of analysis was a critical self-awareness of the use of language that, once applied to the problems of philosophy, will become fruitful and a useful instrument. The downside of analysis is the stunting of intellectual growth in the 20th century.