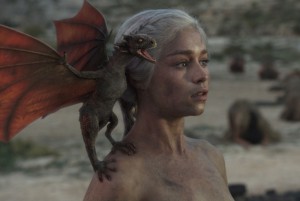 Finally got back to the show – that’s how hectic my life has gotten. Watched episodes 3-5 Monday, then 6 to 8 on Thursday and 9 & 10 today. At first, after episode 1, I went ahead to re-read Game of Thrones because I didn’t really remember the detail or the lesser characters or smaller plot points. Then I watched the 2nd episode and fell in the same rut as the rest of you did: comparing and complaining. I realized that I was doing the show a disservice so I lucked out by missing the weekly showing and read other books to kinda bury the re-read deep.

That let me enjoy the show more – erode the silly expectations or some of my more fanciful imagination — and allow myself to ride the dramatic beats better. Give the show a fair shot and shut up my inner critic.

Most of the complaints I’ve read elsewhere are valid (too much time spent on prostitutes — who the hell is Ros? — or not enough focus on battles or the awesome Vale castle — budget problems?) but at the same time I grew to like the acting, the small changes (Shae is a hell lot more blunt and strong-minded than I remember) and i felt the show found its footing as the episodes rolled on.

The final scene worked well – I felt this was the most important cliffhanger – and I’m grateful the show succeeded as an adaptation. It wasn’t perfect, no doubt, but I’m glad it was a great viewing experience all around.

What they did right:

What they did wrong:

Regardless of the criticisms, I feel the creators did a good job their first time around. A show this terrific will learn from the mistakes and tighten up the scripts, add better talent as it goes forward. I look forward to the next season!