I agree that devil’s advocacy in no way indicates the position they hold, but this misunderstands the philosophy as autobiography maxim. That one may take positions one doesn’t actually hold does not militate against the confession thesis, for the reasons of their advocacy remains the same as if they were advocating their own beliefs. If one were to be an incorrigible devil’s advocate, he would be an anarchic epistemologist who thinks all positions deserve advocacy, and that would be a position of its own open to the confession charge about his own beliefs regarding positions and ideas.

One’s philosophy is one’s “personal confession,” an “involuntary and unconscious memoir.” This means great philosophy is profoundly autobiographical, for it cannot help betraying its grounds in the drives and the wishes of the heart: “the moral (or immoral) intentions in every philosophy constituted the genuine germ of life out of which the whole plant grew every time.” (Beyond Good & Evil: The Prejudices of Philosophers, Section 6) 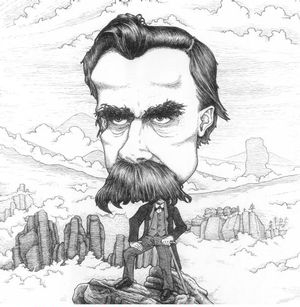 It’s not so much about the ordinary beliefs of ordinary people that are under question, but the thinker’s justification of these beliefs by thinkers who initially started out as critics only to end up as apologists of the system of thought they pretended to fiercely expose.

Philosophers attempted to constitute human knowledge on permanent and immutable foundations. Construction and criticism are compatible, for one rejects only to replace, getting rid of what is considered nonsense of beyond justification. The average person’s conscious thought are taken to be mostly instinctual activities, while the philosopher is considered as cautious and self-conscious in his controlling of thoughts. But Nietzsche think many philosophers weren’t that careful or self-aware, for they failed to call in question the deep falsehoods and unmeliorable fictions that were worked out at the dawn of civilization and remained with us ever since. As a result, thinkers located their foundations upon pre-existing foundations, which means their edifices conformed to a conceptual geography that was already laid down by previous thinkers, on all-too-familiar topography that is no longer detectable. “The most self-conscious thoughts of a philosopher are guided by his hidden instincts and forced into determined paths.” (Beyond Good & Evil 3)

The drive to knowledge or the will to truth isn’t the father of philosophy, for other (and more basic) drives utilize this claim as an instrument. The common feature to all drives is that each “one of them would like only too well to represent precisely itself as the ultimate purpose of existence and as rightful master of all the remaining drives. For every drive is herrschsuchtig: and as such it attempts to philosophize.” (Beyond Good & Evil, ch 1, Section 6).

Philosophers are the “wily spokesman for their prejudices which they baptize ‘truths’” for they are neither honest nor courageous in that they do not speak to, much less admit, the true nature of their actions, even when they are aware of what they are doing.