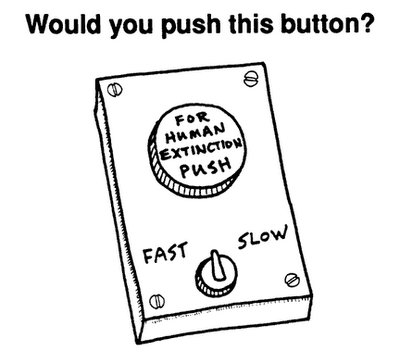 I am not well-versed on the anti-natalist literature, but the best way to learn about anything is diving head-first into the pool. As far as I know, Cioran was never a poster boy for antinatalism. Although some of his writings do seem lend an appearance of endorsing antinatalism, such as:

..this little blind creature, only a few days old, turning its head every which way in search of something or other, this naked skull, this initial blankness, this tiny monkey that has sojourned for months in a latrine and that soon, forgetting its origins, will spit on the galaxies. — Drawn & Quartered, p. 82

Cioran was more complex than a simplistic political position will allow. He was just as much a Gnostic as a critic of Gnosticism, given the following example:

…nothing could persuade me that this world is not the fruit of a dark god whose shadow I extend, & that it is incumbent upon me to exhaust the consequences of the curse hanging over him & his creation. — New Gods, p. 89

Cioran was extremely skeptical to any proffered solutions to humanity’s alienation – he did not advertise the abandonment of existence, for he never sought transcendence. Instead, he recommended humiliation in which we return to the earth.

I suspect this topic is more of a matter of whether he was a misanthrope, a true high priest of the Apocalypse.

In History and Utopia, Cioran did claim that Albrecht Durer (creator of the 4 Horsemen of the Apocalypse woodcut) was his prophet. Then he went on to say:

The ages advance only by treading the hordes underfoot; the weak will die no less than the strong, and even these riders, save one. It is for him that the ages have suffered and groaned.

Then again, he wrote: Humanitarianism is but self-delusion & pacifism is sheer intellectual masturbation. (Infamous Past, p. 11) Basically all evolution is decay & decline, and all progress inevitably heads towards destruction. Any aspiration or accomplishment of man that attempts to work towards anything is nothing but the acceleration towards apocalypse. One could argue that Cioran’s answer to all theological questions (why did god create the universe, and man, and if God is good, why did he allow evil to run amok, etc) is ultimately simple: apocalypse. For Cioran, the Apocalypse is tantamount to God. The Four Horsemen of the Apocalypse are agents of God to end material existence and isolate the saved from the damned.

So, whosoever thinks the world or existence can be perfected, even if it is through a self-destructive maneuver of mankind, falls under Cioran’s disdain.