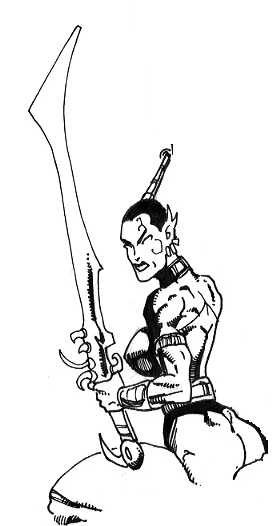 Truth is a woman; she only loves a warrior. – Nietzsche
As the Greek deity Enyo, Bellona often carried weapons of war drenched in blood, and accompanied Ares, the premier god of war. As the Roman goddess, she was the original war deity. Currently a member of the Senate at Teotihuacán.

A hopelessly self-centered goddess, Bellona is constantly embroiled in drama, for she needs it in order to keep boredom away. She finds comfort and security anathema, and seeks trouble instead. A passive aggressive sado-masochist, pain is a source of pleasure, and Bellona enjoys complaining about such troubles, being the victim. She despises the polite gods, and often argues with them. Bellona has a long history of tragedies and traumas, and is always on the outlook for a new one, consciously or unconsciously.

Predictable behavior actually give rivals a sense of control, but Bellona is deliberately unpredictable. Her inconsistent and purposeless actions keeps others off-balance, and wears them out in the effort to glean the rationale behind her actions. Thus, she effectively terrorizes and intimidates the other gods.

Since the gods have ruled for thousands of years, they have become creatures of habit, dependent on routine and addicted to familiarity. Bellona relish in her deliberately unpredictable behavior, completely lacking consistency or purpose, for it keeps others on their toes. Her reputation precedes her, an intimidating front of power.

Long accustomed being masters of their domain, the gods find the sudden and unpredictable to be distasteful, and annoying. All animals, including self-conscious species (human beings), operate in patterns, which made it easy for the gods to exploit them and dominate. However, despite being divinely free, able to change behavior at any time, gods have grown complacent with routine. Habits, techniques, methods require no effort at all. Bellona creates fear by intentionally upsetting others to seize the initiative.

Forever reading the motive behind each other’s behavior, the gods use predictability against one another. Bellona pulls off inexplicable moves and puts them on the defensive, nonplussed and eventually intimidated. Intimidation is the most efficient strategy that paralyzes the will of an enemy to resist and sabotage their ability to formulate a calculated response. Bellona gains power through sporadic acts of violence that induces a permanent experience of panic. Her goal in a terror campaign isn’t victory but total chaos, in the hopes of provoking her enemy into desperate overreaction.