One of the main reasons of conceiving my graphic novel epic Pantheon is to explore the post-human aspect of science fiction, and I felt this was the most interesting direction to take the stories of mythology towards. For me, science fiction works best when it expresses the future according to our hopes and fears, but mythology works in a different fashion – it comes from some type of a collective unconscious of the human experience. That said, a combination of both elements should be quite rich and dynamic.

I first came across the post-human element in H. G. Wells’ The Time Machine, which was actually more about human evolution than time travel, because the Traveller arrived at a future where the homo sapiens evolved into two separate species: a dark version of post-humanity. Then I read The Dying Earth, Dune, Hyperion, among other classics of posthumanism, but it wasn’t until I watched the anime Neon Genesis Evangelion that I first found the proper motivation to develop Pantheon.

In Evangelion, mankind had reached an evolutionary dead end, so a secret cabal devised a plan to artificially induce the next stage of evolution by bringing about a global catastrophe. They attempted to merge the Fruit of Knowledge with the Fruit of Life that supposedly brought about a merging of the entire human race into a single entity, a single-form organism that combined all individual souls into one, and finally achieve perfect contentment where suffering or loneliness was finally eradicated.

In Pantheon, I had determined to leave that question of mankind’s fate as an open-ended one, whether the species succeeded in transcending its physical limitations like in Childhood’s End, or fell short in glorious failure. See this screen capture from chapter 2 of Volume 1: 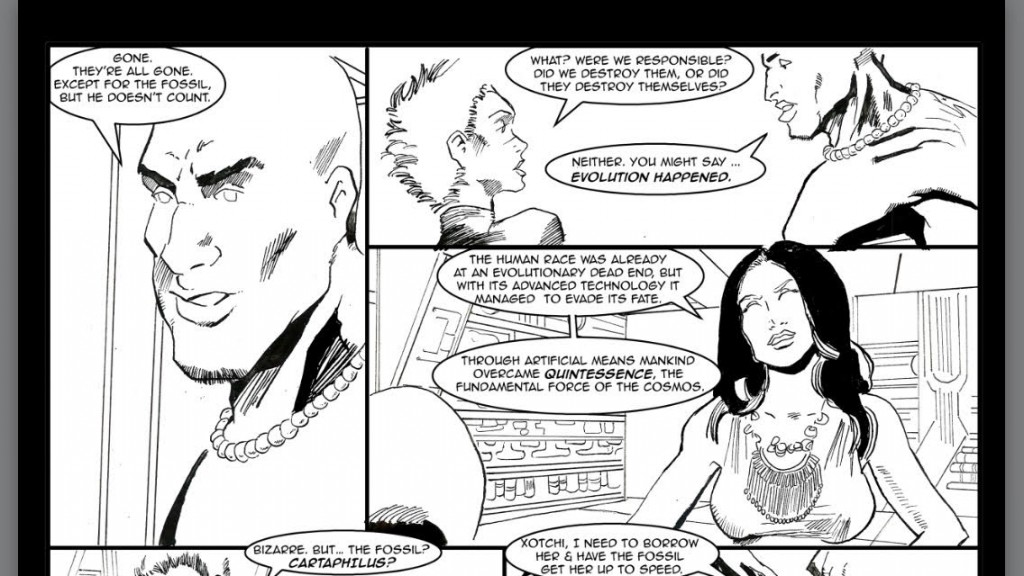 Admittedly, looking back, I thought this was too spelled out. Perhaps we should refrain from answering such mysteries – at least leave the gods their vanity that man did not surpass them, but merely remained true to themselves as deviations from the normal evolution of the planet. Their choice of the Tree of Knowledge over the Tree of Life resulted in the permanent experience of the marginal and the pursuit of progress. That they failed to return to a sacred communion with god, with the Tree of Life, was their doom.

Some of the more astute gods should note that the essence of humanity was malaise, a self-consciousness that result in the shocking reflection that they did not belong to their natural environment. Thus they could only symbolize and cope with reality in terms of how it is not.

I believe there should be at least three versions of the Exit Mundi: the Official Explanation™ held by Teotihuacan (the City of Gods) and most major pantheons, the consensus belief among the members of Pantheon, with varying degrees, and Cartaphilus’ version. They should be the following: Disappearance, Artificial/Natural Evolution, or Suicidal.

Bottom line: Like a good writer, the beliefs about the future of the human race should not determine Pantheon any more than as a logical result of the work itself.