Poststructuralists found Hegel’s technique of dialectical arguments charming, even seductive, due to their gift of demonstrating the incoherence of particular concepts. But more importantly, the Absolute of Hegel was an omen about how the critique of philosophy is little more than the latest pretender to the throne of supreme cognitive authority. Jean Hyppolite interpreted Hegel as saying that the discourse of philosophy contains the critique of philosophy within itself. Michel Foucault realized this and cautioned that “we have to determine to which (our) anti-Hegelianism is possibly one of his tricks directed against us at the end of which he stands, motionless, waiting for us.” (Archaeology of Knowledge, p. 235) Jacques Derrida claims différance “must sign the point at which one breaks with the system of the Aufhebung and with speculative dialectics.” (Positions, p. 44) Butler’s work, Subjects of Desire is an insightful genealogy of the Hegel reception in 20th century France. The coherence of the self-identical Hegelian subject has been disintegrated by two generations of 20th century French thinkers, from the thirties to the sixties. Yet the Hegelian subject is not what the French describe, which is not a self-identical subject that travels smugly from one ontological place to another, for it IS its travels, and is every place in which it finds itself.

The second generation of French thinkers (Jacques Lacan, Gilles Deleuze and Foucault) took the concept of desire as a sign of the disintegration of the coherence of Hegel’s ontological entity. Butler says they misread Hegel’s formulations of subjectivity, while remaining in prison of the Hegelian dialectical mode of analysis they try to escape.

They attempt to evade the Hegelian dialectic as a philosophical black hole by rejecting the “romantic postulation of the dialectical unity of opposites” as something untenable in the context of the poststructuralist formulations of language as an open-ended field of potential meanings where difference, not unity, is emphasized, which means the freedom of interpretation is emphasized over closure, finitude, and etc.

Derrida, just like Foucault, was wary of the seduction of Hegel. His declaration that Hegel was the “last philosopher of the book and the first thinker of writing” (Of Grammatology, p. 26) only meant Hegel’s philosophy was both the final culmination of western metaphysics and its initial deconstruction.

But Butler insists the rejection or negation of Hegel enacts a philosophical move which is in itself dialectical and implicitly a Hegelian move. In order to refute the dialectic one deploys a dialectical mode of reasoning. An argument against the logic of the dialectic will only be its own antithesis, which will in turn yield a new synthesis that transcends the initial thesis and the antithesis. Therefore, Hegel’s dialectical logic is a cannibal of philosophy, since it gobbles up the opposition by transforming them into antitheses. 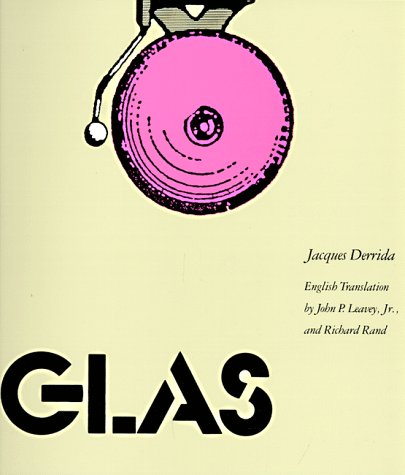 Derrida knew this all too well, and in Glas, he went to extremes with artifice and obscurity in his showdown with Hegel and avoided falling victim to the system’s uncanny power of assimilating its critics, for the history of ideas is a continued absorption and sublation by the system in its passage towards the genuine historical Absolute. Derrida had the text split into two columns on each page where the left provided an analysis of Hegel with respect to the family and the right discussed the French novelist Jean Genet‘s novels, but this is an opposition that does not meet the dialectical logic of Hegel head-on. The Genet column is actually a parody, for it copies the dialectical mode of Hegel by mimesis. Because it is not an refutation of the Hegel dialectic, this mimic cannot be cannibalized. This reciprocal exchange between literature and philosophy creates an undecidable text in Glas.

By leaving the final meaning of his text within the unsaid relations between the two columns, Derrida eludes Hegel and places himself outside his own discussions of Hegel. A self-styled “purest of the bastards?” Say it with me.