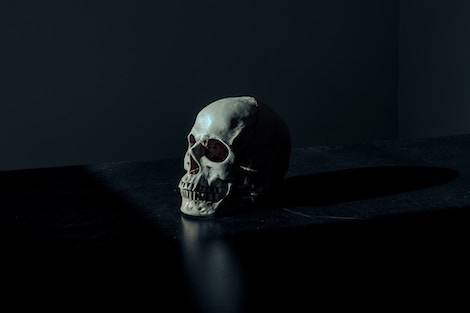 Nothing at all. Our relationship with death has profoundly shaped Western culture. A pervasive death consciousness has created religions, nourished philosophies and eventually stimulated scientific investigation, as well as fueled fanaticism, a brooding and melancholic pessimism, which resulted in nihilistic conclusions. Such nihilistic sentiments are far more than merely isolated occurrences, pervasive although manifesting in various guises. The ancient Egyptian empire on the Nile held a profound and abiding interest in death that generated all-consuming fantasies of a transcendent world and elaborate rituals for honoring the dead. Ruminations on death accounted for their most magnificent accomplishments. The great pyramids of Giza are technologically brilliant Houses of the Dead.

While the Egyptian religion was rife with contradictions and inconsistencies, the obsession with death was strongest in the influential cult of Osiris, the king and judge of the dead. This cult of death was so pervasive that its mortuary and coffins and the Book of the Dead taught to Egyptologists much about this ancient civilization. This obsession with death generated an abject pessimism, and by the New Kingdom in 1570 BCE, the Osiris cult became an escape from the grim realities of life.

The ancient Egyptians weren’t alone in finding existence less than satisfactory. The Epic of Gilgamesh (2300 BCE) was extremely popular among the Sumerians and Babylonians, who felt the precariousness and futility of life. The epic demonstrated the world as a quagmire, a place where good cheer is an aberration. Man is condemned to slog through an useless existence until life ends where it began, in the darkness of nothing. Such profound pessimism & hopelessness that inspire the poem are as revealing as its centuries of immense popularity.

Over a thousand & half years later, the Iliad (800 BCE) appeared & influenced generations of Greeks. Much like the world-weariness from civilizations preceding the Greeks, the epic of Troy painted a profoundly negative assessment of the human condition. Hades offered no solace to mortals, for it was the domain of eternal gloom beyond the rivers of Woe, Wailing, and Forgetfulness. The world of the living is determined by violence, and violence is celebrated as the only means for imparting significance to an otherwise pointless existence.

Chapter 3: We Know Nothing.